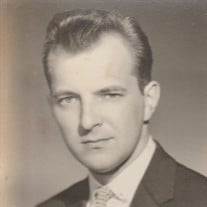 STANLEY J. WALCZYK, D.O. Bangor,PA Stanley J. Walczyk, D.O., 91, of Bangor, PA, peacefully passed away on Saturday, August 28, 2021 while surrounded by his family, who loved him immeasurably. He was the husband of the late Alexandra (Chmurzynski) Walczyk, with whom he shared 54 years of marriage prior to her passing in 2013. Doc was born October 14, 1929, in New Boston, PA, the son of the late Stanley and Josephine (Maciak) Walczyk. He was a graduate of Mahanoy Township High School in 1947 and received his BS degree in biology and chemistry from Alliance College, Cambridge Springs, PA, in 1953. He served with the United States Army for two years as a medical laboratory technician, attaining the rank of Corporal. After his discharge from the army, Doc worked as a chemist for Hoffman LaRoche Pharmaceutical in Nutley, NJ, and taught Science at Nutley Junior High School prior to entering the Kansas City College of Osteopathy and Surgery in 1959. He received his Doctor of Osteopathy degree in 1962, and opened his Family Medicine practice in Bangor the following year. Doc was a member of Our Lady of Mount Carmel Church, the Roseto American Legion Post 750, and was a 3rd Degree member of the Knights of Columbus. Doc was the team physician for the Pius X High School Royals and the Bangor Area High School Slaters for several years in the 1960’s and 70’s and served as school physician for the Bangor Area School District. After decades of long office hours, house calls, football games, and school physicals, Doc was able to enjoy 30 years of retirement. He spent his time fishing, playing chess, making beer and wine, rooting for the Philadelphia Eagles in good times and bad, and being a beloved Pop Pop to his four grandchildren. Doc is survived by his son, Leonard C. Walczyk and his wife, Carol, of Chatham, NJ; his daughter, Barbara Walczyk Lombardo and her husband, Robert, of York, PA; grandson Christopher M. Walczyk of Chatham, NJ; and granddaughters Stephanie E. Lombardo and Adrienne J. Lombardo of York, PA, and Emily C. Walczyk of Chatham, NJ; sister-in-law Irene Duque and brother-in-law Fernando Duque of Glen Cove, NY; and a niece Katia Duque and her son Logan of Glen Cove, NY. In addition to his wife and parents, he was predeceased by a sister, Theresa V. McCarthy, and a niece, Tina M. Corbett. A Mass of Christian Burial will be celebrated on Friday September 3rd 2021 at 1 PM in Our Lady of Mt. Carmel Church Third & Garibaldi Avenues Roseto. At Stanley’s request there will be no calling hours. Interment with Military honors will be in the New Mt Carmel Cemetery, Roseto. In lieu of flowers, memorial; donations should be made in Stanley’s name to the Florence deHaven Stick Memorial Scholarship to benefit nursing students C/O VNA of Hanover and Spring Grove Hospice 440 Madison Street Hanover PA 17331 The Fiore Funeral Home, www.fiorefuneralhome.com, 230 Market Street Bangor has been entrusted with the arrangements. FIORE FUNERAL HOME

STANLEY J. WALCZYK, D.O. Bangor,PA Stanley J. Walczyk, D.O., 91, of Bangor, PA, peacefully passed away on Saturday, August 28, 2021 while surrounded by his family, who loved him immeasurably. He was the husband of the late Alexandra (Chmurzynski)... View Obituary & Service Information

The family of Stanley Walczyk created this Life Tributes page to make it easy to share your memories.

Send flowers to the Walczyk family.