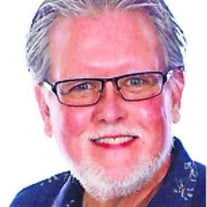 Robert W. “Rob” Merchant, 71, of Nazareth, died Feb. 27, 2021, surrounded by his loving family in St. Luke’s Hospital, Anderson Campus, Easton. Born Feb. 2, 1950, in Annapolis, Md., he was a son of the late James William and Emely (Wilson) Merchant. He and his beloved wife, Cecelia (DelBacco) Merchant, were married 17 years on Jan. 21. A Baltimore Polytechnic Institute high school graduate, he proudly served in the U.S. Air Force as an avionics instrumentation technician at Pease Air Force Base, Portsmouth, N.H. He began his career in 1974 doing photography for various companies, such as Crimson Camera and Bell and Howell. In 1979, he worked for Air Products in Massachusetts, which moved him to Pennsylvania. From 1984 to 2013, he had a career of almost 30 years with AT&T, completing his tenure with AT&T as its lead interactive multimedia manager. In his retirement, he pursued his dream and started his own photography business, Digital Media Magic. He assisted in freelance work with Christmas City and all eight Lehigh Valley Press Papers, specifically the Bethlehem Press. He saw his life as a wonderful adventure that was built on hope as a result of his faith in Jesus Christ. He was a member of Calvary Baptist Church, Easton, serving on the communion and safety teams. He loved to camp, travel with his wife, surround himself by family, take photographs, learn about new technology, and help others selflessly. In addition to his wife, he is survived by sons Steven Merchant and his fiancée, Tayler Brandt, of Catasauqua, Antonio DelBacco and his life partner, Kyle Siegel, of Allentown, Ronnie DelBacco and his wife, Dawn, of Klecknersville; daughters G. Lindsey Merchant of Rochester, N.Y., and Tara Fahr of Norristown; nine grandchildren; eight great-grandchildren; sisters Betsy Phelps of Ohio and Cathy Franklin of Maryland; and a brother, David W. Merchant of Maryland; and many loved nieces and nephews. He was predeceased by a brother, James W. Merchant. In lieu of flowers, memorial donations may be made in his name to the church, 5300 Green Pond Road, Easton, PA 18045. Arrangements were made by Fiore Funeral Home, Bangor.

The family of Robert W. Merchant created this Life Tributes page to make it easy to share your memories.

Send flowers to the Merchant family.