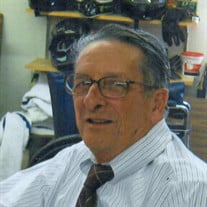 Ignatius C. “Iggy” Farino, 86 of Pen Argyl passed away Monday July 19 at home. He was born in Pen Argyl on February 9, 1935, a son of the late Mary J (Trigiani) Farino and Charles Farino. His beloved wife for 51 years, former Elizabeth Barr passed in 2013. Ignatius was a 1953 graduate of Bangor High School and served Korea twice, leaving college the first time to serve his Country. He owned and operated the former Farino’s Service Station in Pen Argyl where friends gathered to hang out and listen to stories of Iggy’s youth including fond memories of his time in the Boy Scouts, his invitation to the National Jamboree in Valley Forge and his marble championship as a youth on Garibaldi Avenue in Roseto and had worked in the garment industry as a splitter for over 25 years retiring in 1999. He was a little League Baseball Coach for Pen Argyl for many years and played Bass drum for the former Roseto Chieftans Drum and Bugle and participated in many competitions. He loved spending time with his family and especially Sunday morning coffee time. The family would like to thank Slate Belt home Health Aides; Alexis, Christine, and Carla for the loving care they provided their father. He was a devout catholic, previously a member of St. Roch’s Catholic Church in West Bangor and most recently Our Lady of Mt. Carmel Catholic Church Roseto and UNITE-garment workers union. He is survived by his children: Frederick (Linda) Farino of Pen Argyl; Carmela (Todd) Albert of Bangor,Gregory (Leslie) Farino of Bradenton,FL , eight grandchildren; Vincent (Megan)Farino, Monica (Ryan) McCraken, Sophia Farino, Matthew ( Carissa) Albert, Cory Albert, Lauren, Olivia and Grace Farino, three great grandchildren; Cullen, Mikayla and Giovanni and a brother Fred (Joyce) Farino of Roseto. A Mass of Christian Burial will be celebrated on Monday July 26, 2021 at 11:00 AM in Our Lady of Mt. Carmel Church Third & Garibaldi Avenues Roseto. Family and friends may call on Sunday July 25 from 6 to 8 PM and on Monday from 9:30 to 10:30 AM in the Fiore Funeral Home www.fiorefuneralhome.com, 230 Market Street Bangor. Burial with Military Honors will be in the New Mt. Carmel Cemetery, Roseto

The family of Ignatius Farino created this Life Tributes page to make it easy to share your memories.

Send flowers to the Farino family.