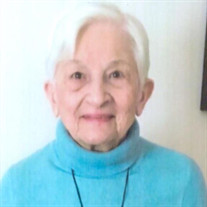 Clementina N. (Dina) Kessler, 91 passed away peacefully Thursday, September 16th at Lehigh Valley Hospital- Cedar Crest. She was born on December 24 1929 in Bangor a daughter of the late Michaelangelo and Kathryn (Callie) Diorio. Her beloved husband for 64 years Louis Kessler passed away in 2015. Clementina was a 1947 graduate of Bangor High School and attended nursing school after graduation. Sadly, she contracted polio and was not able to finish school. She worked in several blouse mills in the Slate Belt Area and later became a hairdresser owning her own shop in Bangor for many years. An avid reader, she also enjoyed word puzzles and watching sports, especially the Phillies. She was a wonderful cook and nothing brought her more happiness than cooking and serving delicious meals to her family. In her life, her family was her biggest joy. She was also a former den mother for the Cub scouts which she always fondly remembered. She was a former member of Our Lady of Mt. Carmel Church, Roseto where she sang in the choir as a young girl and is presently a member of St. Elizabeth of Hungary Church Pen Argyl. She is survived by her five children; Richard (Patty) Kessler of Bangor, Louis of Emmaus PA, Michaelangelo (Nancy) Kessler of West Bangor, Joseph (Nancy) Kessler Pen Argyl, Kathie (Perry) Saraceno of Victor NY, grandchildren; Philip(Kate), Clementina, Corinne(Wade)Groff, Colin(Kim) and Nicholas and six great-grandchildren; Brenna, Natalie, Cody, Jordan, McKenna and Claire, sisters; Marie DePaolo, Kathleen(Fred)Curcio both of Bangor and several nieces and nephews. She was predeceased by a grandson Michaelangelo Saraceno and nephews Fred Curcio Jr and Stephen DePaolo Jr. A Mass of Christian Burial will be celebrated on Wednesday September 22nd, at 1:30 PM in St. Elizabeth of Hungary Church 300 West Babbitt Avenue Pen Argyl. There will be no calling hours. Burial will be in St. Roch's Cemetery, West Bangor In lieu of flowers, memorial should be offered in Clementina’s name to either The Wounded Warrior Project by calling 855-448-3997 or to St. Jude’s Children Hospital 501 St. Jude Place, Memphis, TN 38105. Services are under the care of the Fiore Funeral Home Bangor. Online condolences may be offered at www.fiorefuneralhome.com.

The family of Clementina N Kessler created this Life Tributes page to make it easy to share your memories.

Send flowers to the Kessler family.