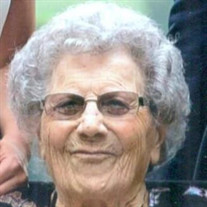 Anna M. (Mary) Karasek, age 100 years, peacefully left this life and went to her eternal rest on Wednesday, August 11, 2021. Mary was born in 1921 in the town of Biccari,Italy. She was the daughter of Pietro Molle and Maria Checchia. She was the youngest of five children and her four brothers (Salvatore, Giuseppe, Antonio, and Donato) all predeceased her. She immigrated to the United States in 1935 and immediately began work as a sewing machine operator in the Slate Belt. She learned English language; and, she became a naturalized citizen; and, she worked hard as a seamstress and labored in the local garment industry from age fourteen until she was eighty years old. She was a member of Our Lady of Mt. Carmel Catholic Church, Roseto and UNITE (formerly the International Ladies Garment Workers Union). In addition to her work, she valued her faith, her church, her family and her many friends. In 1946, she married Charles Karasek, Jr (who predeceased her in 1981). She was the proud mother of two sons; she is survived by both of those sons; namely, Pietro C. Karasek (and his wife, Joanne of Bangor and Ronald J. Karasek, Sr. (and his wife, Kimberly) of Upper Mount Bethel Township, Pa. In addition to her two sons, she is survived by several grandchildren: Ronald J. Karasek Jr and Krista, his wife; Eric C. Karasek and Abby, his wife; Nicole Ruggiero and Joseph, her husband; Toni Karasek; Zachary A. Karasek and his fianc’e, Eleni Kotretsos; Courtney M. Karasek; Nicholas J. Karasek; Kaitlyn L. Karasek and Morgan J. Karasek. One grandchild, Ryan R. Karasek predeceased her. She is also survived by eight great-grandchildren: Evan Karasek, Nathan Karasek, Anna Marie Karasek (her namesake), Addison Karasek, Cooper Karasek, Chloe Karasek, Chase Karasek and Sofia Ruggiero and several nieces and nephews. Viewing is scheduled for Sunday evening (August 15, 2021) from 6 to 8 pm and on Monday morning (August 16, 2021) from 9:30 to 10:30 am in the Fiore Funeral Home, www.fiorefuneralhome.com, 230 Market Street, Bangor. A Mass of Christian Burial will be celebrated on Monday (August 16, 2021) at 11:00 am in Our Lady of Mt. Carmel Catholic Church Third & Garibaldi Avenues, Roseto with interment at the New Catholic Cemetery, Roseto, Pa. In lieu of flowers, memorial donations may be offered in Anna M. ( Mary‘s) name to the church 560 North Sixth Street Bangor PA 18013.

Anna M. (Mary) Karasek, age 100 years, peacefully left this life and went to her eternal rest on Wednesday, August 11, 2021. Mary was born in 1921 in the town of Biccari,Italy. She was the daughter of Pietro Molle and Maria Checchia.... View Obituary & Service Information

The family of Anna Marie Karasek created this Life Tributes page to make it easy to share your memories.

Send flowers to the Karasek family.